"If all of life is like a play and everyone has their roles, whether behind the scenes or on stage, I feel this is my time to step onto the stage and open my heart to the world." 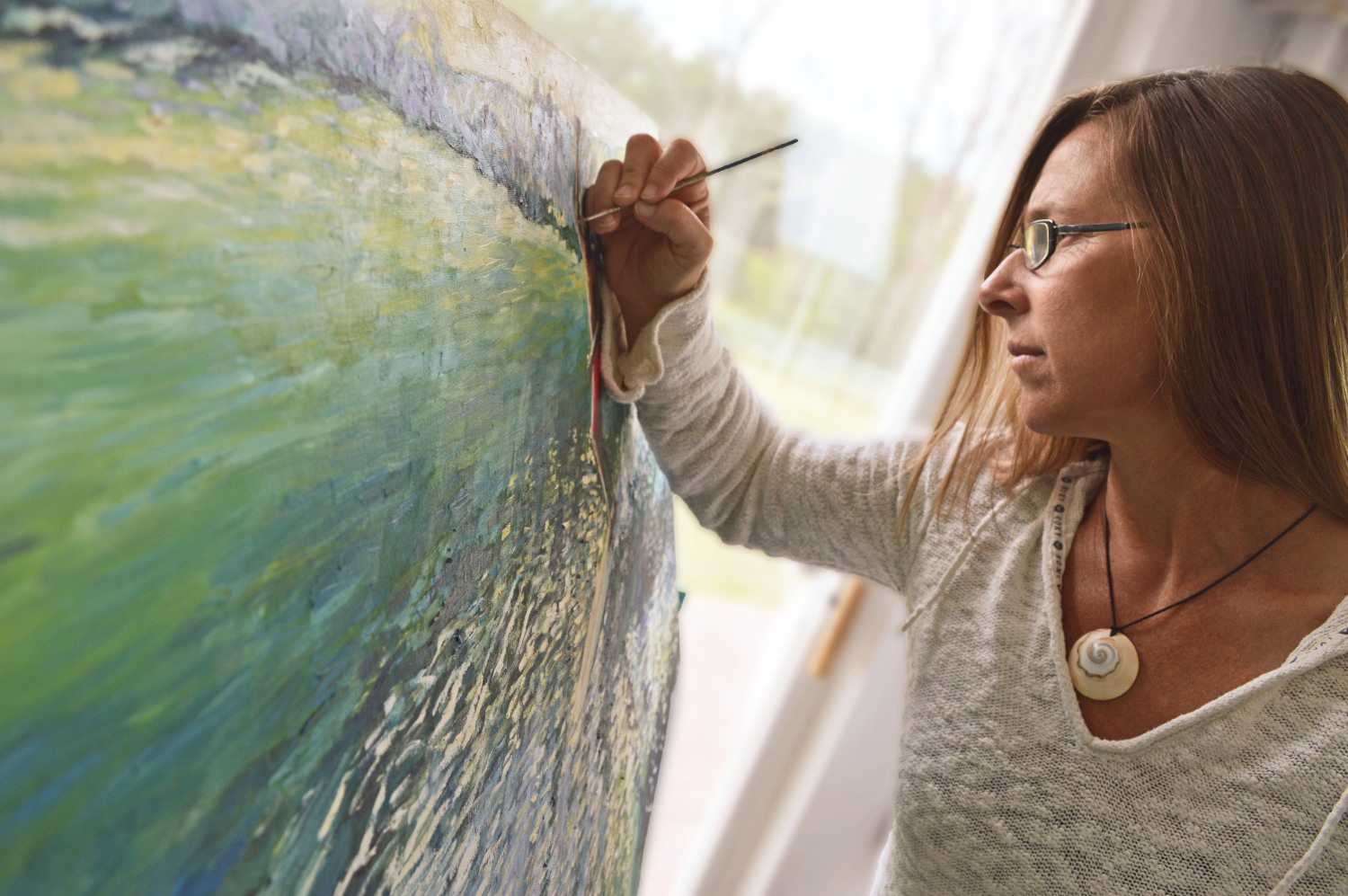 Becky grew up in rural Montana on a farm, having no knowledge of the ocean or art for that matter.  But at an early age she knew she wanted to be a marine biologist.  While driving the tractor in the fields or walking through the grain pulling weeds, she would escape into dreams of living on a tropical island somewhere, studying the reefs, and spending the days in the water.  Later, having graduated from the University of San Diego with a Marine Science/Biology degree, those dreams became a reality.  While living in San Diego, Becky learned to surf, and it quickly became her lifestyle.  Until then, she had never known an experience that encompassed every part of her being, nor shaped it like surfing.  Learning to surf humbled her and gave her a great respect for the ocean.  Having the ability to stand up and ride on moving liquid is the most amazing thing to her.  It is a place she feels completely herself: expressing her creativity through graceful movement, challenging her physical abilities and endurance, exploring her scientific fascination of waves, or just playing in the water.

Becky traveled to Australia, Hawaii, and Fiji. In 1993, she married her Canadian husband, who is also an artist, and together they lived in California, Papua New Guinea, and Tanzania.

They traveled to many places around the globe, and in 2010 they moved to the interior of British Columbia, Canada with their 4 boys where her husband teaches art.

Becky began painting while living in California.  Her husband had introduced her to a new world, the world of art, and she eagerly began painting the beach and the surf.  She recalls, "I would grab my camera, strap the boys into their car seats, and drive to all my favorite beaches.  Then at night time when they were all tucked in bed, I would get out my paints and try to capture those scenes."

Becky's painting style has changed since moving inland. "I  think back to that time of being able to surf every day.  Or even later when, being a mom, I could get out and surf with my friend only once a week.  We went out no matter what the conditions were.  Often when the surf was flat like a lake, or the wind was howling and the water all churned up, we would be the only ones out.  But it didn’t matter, we could be out!  It is amazing how many waves one can still catch on a terrible day.  And if you saw a dolphin or a seal, it just made the day complete.

"I now live in a place that is far from the sea, my hair is no longer salty and kissed by the sun, my skin no longer prickly and bronzed, my feet are pale and stuck inside shoes or boots for much of the year, and my favorite board hangs up in our garage, looking down at me, beckoning to go out.  While living near the ocean I was able to take in all that was around me and reflect it in my art.  Now, however, my work is a collection of what I can pull from memories; feeling again what I felt while riding the waves, or what I experienced with the marine life. Iam turning inside out."

"I paint now out of thankfulness to the Creator who designed the ever changing waves and gave me the ability to ride them.  I paint out of gratitude to God who made all those bizarre and wonderful sea creatures that I have been able to see, collect, interact with, and observe.  And I paint now, because it is my time to step out and share my heart for others to see."